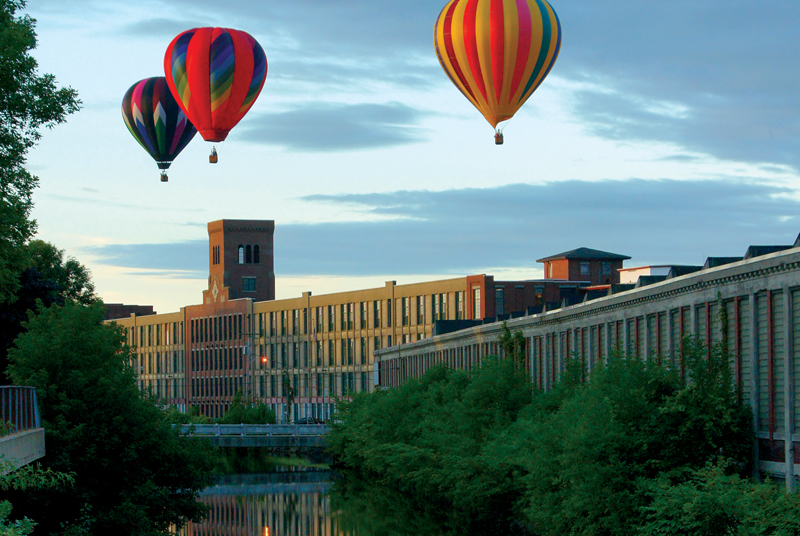 With a shared population approaching nearly 60,000, the “twin cities” of Lewiston and Auburn (L/A) are the cultural and economic center of Androscoggin County. Sitting just above and between the downtown of both cities are the Great Falls of the Androscoggin River, which helped the area rise to prominence during the last century as a center of Maine’s shoe and textile industry. Visit Museum L-A, located in one of the former Bates Mill buildings, to learn more about the towns’ histories.

Today, visitors are invited to see the falls with a walk along the Androscoggin River Walk, a mile-long paved trail that travels from the falls south to a pedestrian bridge crossing the river to Lewiston’s Simard-Payne Memorial Park, home to celebrations like the Great Falls Brewfest in June, Liberty Festival (July 4), Dempsey Challenge in October, and August’s Great Falls Balloon Festival which fills the day and night sky with dozens of spectacular hot air balloons.

Lewiston is home to the Basilica of Saints Peter and Paul, Maine’s only basilica and the second largest church in New England. The structure, completed in 1936 to serve the large French-speaking population, is modeled after the Cathedral at Chartres and features a striking rose window. One of Lewiston’s other prominent landmarks, Thorncrag Nature Sanctuary, is the highest point in the city. In addition to its reputation as a great hiking, walking, and snowshoeing destination, it is also a protected wildlife and bird habitat with more than 70 documented species of birds.

Auburn offers the delights of the area’s best bass fishing in the wonderfully clean Lake Auburn, and for rock hounds there is feldspar, smoky quartz, tourmaline, and, of course, apatite to be unearthed at Mount Apatite located west of downtown.

Both cities offer a collection of cultural gems: The Public Theatre, the state’s highest rated equity theater; over 60 annual performances at the historic Franco Center; the world-renowned Bates College Dance Festival held each summer; and family-friendly Lewiston Auburn Art Walk held on the final Friday of the warmer months, among others.

Hiking in LA Metro Area (Androscoggin County)
The mountains of western Maine are covered with pine and deciduous trees and trails that climb steeply. Here are a couple hiking experiences...

Hiking in Bethel
The mountains of western Maine are covered with pine and deciduous trees and trails that climb steeply. Here are four hiking experiences in...

"Mountain Village Tiny House"
At the edge of civilization, the Tiny House is in a tiny town at the end of two state highways, surrounded by thousands of acres of...

Fireside Inn & Suites Auburn
Located in the heart of the Maine, our hotel has a quiet central courtyard, swimming pool, lounge, and restaurant. Government travel/rates...

"Camp Winona"
An Authentic Maine Log Cabin in the Woods with Amazing Panoramic Mountain Views. Located between Rangeley and Bethel, the tiny town of...

Inn At The Rostay
Immaculate, cozy rooms, individually decorated in their own theme. All with private bath, a/c,cable TV, vcr, complimentary videos,...

Oxford Hills Chamber of Commerce
Explore the unlimited beauty and natural resources of the Oxford Hills including pristine lakes, ponds, rivers and mountains. The Oxford...